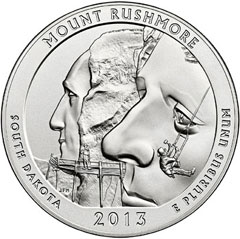 The Los Angeles Times has an article on the recent Fed study which concluded that the $1 bill should not be replaced with the $1 coin.

A review of the year 2013 in rare coin auctions. There were ten coins that surpassed the million-dollar threshold and a new record price paid for a single coin at auction.

Rather than giving coin gifts to family or friends, this article suggests four silver dollar ideas as a gift for yourself.

The ANA Board has passed a budget for the 2013-2014 fiscal year which includes the use of $748,365 from board-designated reserves.

Jeff Garrett discusses how the ANA has recently explored some ways to expand membership.

NGC will exhibit the entire certified population of pattern Panama-Pacific Dollars at the FUN convention. The article includes a link to an online exhibit.

Beth Deisher writes about the roadblocks to the initial proposal for 29 different commemorative coin designs for the 1984 Los Angeles Olympics.

Harvey G. Stack remembers the silver coins of the Milton A. Holmes Collection.

An overview of the wide variety of coins issued by the Isle of Man.

Brazil will issue a set of nine commemorative coins for the 2014 World Cup.

New coin releases from down under include the Chinese Astrological Series Year of the Horse Coins from the Perth Mint and the Sydney New Year’s Eve Fireworks Holographic Silver Proof Coin from the Royal Australian Mint.

And now for some notable auctions. First, an auction for all eight of the 2007 First Spouse Gold Coins including the BU & Proof versions in original US Mint boxes with COAs.

Next, the 1997-P Matte Finish Jefferson Nickel graded PCGS SP70FS. This coin was only included in a special set and had a mintage of just 25,000 pieces.