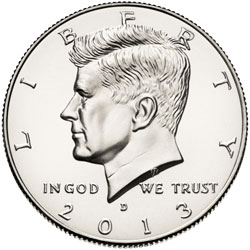 We’re back to bring you another fresh round up of coin collecting news and articles from around the internet!

The US Mint has changed the print of Theodore Roosevelt included in the 2013 Coin and Chronicles Set. Sales for the set have reached just 5,318 so far.

The Mint cannot explain the increase in sales for circulation quality 2013 Kennedy Half Dollars.

Dave Harper discusses the inconsistent use of the “P” mint mark for Philadelphia since regular usage began 35 years ago.

The Professional Numismatists Guild comments on the rare coin market in 2013. The market for high-quality, historic rare U.S. coins did well during the year with eleven coins selling at auction for more than $1 million each.

Doug Winter shares his thoughts on which rare gold coins will be in demand in 2014.

Some considerations and options for how to store coins properly.

Coin Collectors Blog continues the countdown of the top numismatic stories of the year with #4 organizational changes, #3 fighting counterfeits, and #2 broken records.

Here is a look at the Commission of Fine Art’s design recommendations for the 2014 First Spouse Gold Coins.

A bill has been introduced in the Senate which seeks Football Hall of Fame Commemorative Coins in 2017.

Next, the matte finish 1998-S Silver Kennedy Half Dollar graded NGC SP 70. This coin was issued in the US Mint’s Kennedy Collectors Set along with the 1998 Robert F. Kennedy Silver Dollar.