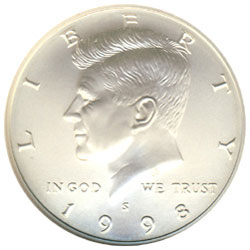 The United States Mint’s plans to offer a special product featuring a 2014 Kennedy Half Dollar struck in 24 karat gold were recently revealed.

Dave Harper has an explanation for the additional 6 million 2013 Kennedy Half Dollars that the US Mint struck late last year.

In more Kennedy related news, the US Mint has recently issued a new survey with various options for a special Kennedy anniversary set and other products.

A member of the Early American Coppers Society has shared a diary of his trip to the Missouri Cabinet sale.

This Numismatic News Viewpoint says rouge dealers need to clean up their act.

Heritage will auction the Eugene H. Gardner Collection of Rare Coins in four unreserved auctions to take place in 2014 and 2015.

A bill seeks a new commemorative coin program emblematic of the National Purple Heart Hall of Honor. Surcharges would be used for construction of a new building and renovation of existing facilities.

Monthly silver bullion sales at the Perth Mint were up compared to both the prior month and year ago period. Gold bullion sales were mixed.

And now for some notable auctions. To go with one of today’s articles, here is the 1998 Kennedy Collector’s Set in original US Mint packaging. The set includes the Robert F. Kennedy Silver Dollar and 90% silver matte finish 1998-S Kennedy Half Dollar.