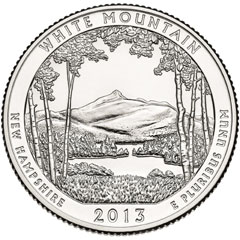 We’re back to bring you another round up of the latest coin collecting news and articles from around the internet!

The United States Mint’s circulating coin production figures are available for the month of January. Quarter production seems to be at the highest monthly level in several years.

On a related note, the author of the Coined For Money blog has already found two 2013 White Mountain National Forest Quarters in his change.

A coin market report from Jim Bisognani recaps January and looks ahead to some auctions in February.

This Numismatic News Viewpoint shares the successful results of searching for copper cents.

What will be the future market for colorized precious metals coins?

Here are impressions from someone who attended the “Introduction to Grading” class a the 2012 ANA Summer Seminar.

Collectors Universe, the parent company of grading firm PCGS, reported their latest quarterly results. For the quarter, there was a 24% decline in coin service revenues.

An article profiling a 17-year-old student who won a coin design contest sponsored by the Royal Canadian Mint.

The ANS has received a long term loan of another group of coins from the Archer M. Huntington collection. They now have back 26,500 of the original 38,000 objects of the collection.

Here is a look at the second series of Numismatic Heritage of Mexico Bimetallic Coins, which feature six different classic coins of Mexico.

And now for some notable auctions. First, a 1964-2005 Kennedy Half Dollar collection housed in a Dansco album. This includes the uncirculated, proof, and silver proof issues within the date range.

Next, an auction for all five reverse proof American Eagle coins, including one gold, one platinum, and three silver coins, plus some additional Silver Eagles. Each coin is graded NGC PR 70 Ultra Cameo.