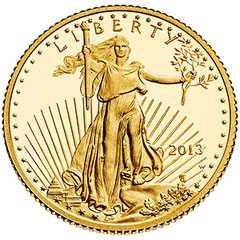 The individual one-tenth ounce 2013 Proof Gold Eagle has sold out at the United States Mint.

Looking ahead, the US Mint will release the 2014 America the Beautiful Quarters Silver Proof Set on January 21.

Heritage Auctions sold more than $105 million worth of coins and currency in just one week.

NGC highlights the three NGC-certified coins which recently sold for a combined $9,870,000 at the FUN Convention auction.

Dave Harper has calculated that the gain realized on the recent sale of the 1787 Brasher Doubloon performed better than an investment in gold bullion over the same period.

F. Michael Fazzari discusses the relative importance of the obverse side in determining the grade of a coin.

The lackluster performance of the Girl Scouts Coins shows a need to reform the U.S. commemorative coin program.

France has launched a new coin series which will highlight various currencies that circulated in France from the beginning of the Monnaie de Paris to the current era.

And now for today’s notable auction. Here is the first year of issue 1986-S Proof Silver Eagle graded PCGS PR70DCAM, which has attracted 48 bids and counting.