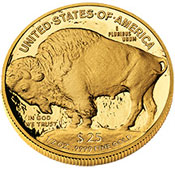 It’s the first post of 2009! Here’s a quick round up of some of the best coin collecting stories from around the web. First, the performance of the key coin related precious metals for 2008. Also, the US Mint’s Double Prosperity Set, the 2009 DC & US Territories Proof Set, Standing Liberty Quarters, trends for the fine art market, the coin market, and notable auctions. On to the links…

Wrapping up 2008, here’s a look at the price performance of gold, silver, and platinum for the year. The post also looks at the highs and lows for the year, which are somewhat shocking in retrospect.

Also of note, the tons in the Gold ETF ended 2008 at record levels, a signal that the demand for gold remains firm.

Did you realize that there’s a fractional 2008-W Gold Buffalo coin still for sale at the US Mint? It’s included as part of the Double Prosperity Set, which now looks like a good buy.

Just how many National Park Quarters will there be? David L. Ganz explores some of the questions previously raised by Susan Headley.

The Florida United Numismatists’ (FUN) convention will be held January 8-11. There will be a full slate of educational seminars to attend.

A Wall Street Journal on the market for fine art, with coins mentioned in passing. Quote from the article “collectors are still buying but are being more selective about price and quality.” This is an observation that I have also read about the coin market.

And now for some notable auctions. First, the one-ounce 2008-W Gold Buffalo coins, one in PCGS MS 70 and one in PCGS PR70DCAM.

Have a great weekend!