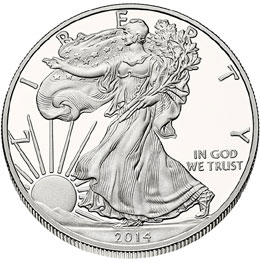 We’re back for another round up of the latest coin collecting news and articles from around the internet!

The United States Mint has provided exact release dates for numismatic products listed from January to March 2014. Also, the individual one ounce 2013-W Proof Gold Eagle has sold out.

Coingrader Capsule discusses the opportunity to find Roosevelt Dimes in older holders with undesignated full bands that can add hundreds of dollars in value.

Dave Harper says collectors should force themselves to think about sales taxes or the indifference could come back and bite them.

A nice overview of the many coins issued in 2014 for the Year of the Horse.

Coin Collectors Blog discusses recent Coin of the Year winners. Did design gimmicks influence the voting rather than the sculpture of the coin?

Thieves stole $200,000 worth of gold and silver bullion from a soldier’s home, marking the fourth house in the Brisbane region to be targeted.

Here is a selection of silver coins from world mints that you may not have considered but should.

Here’s a look at the Sydney Mint Medallion of 1901.

The Royal Canadian Mint has released their latest $20 for $20 silver coin featuring the Canada Goose.

And now for some notable auctions. First, the 2013-W Proof Gold Buffalo graded PCGSPR70DCAM with First Strike designation. While the reverse proof attracted earlier attention, the regular proof has been gaining due to a low mintage.

Next, the 2012 Hawaii Volcanoes 5 oz. Silver Coin graded PCGS MS69. This is the bullion version, which had a total mintage of 20,000 pieces.