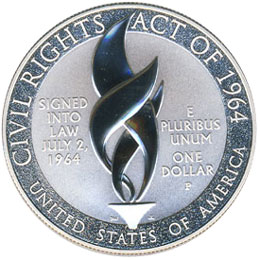 We’re back for one more round up of coin collecting news and articles to finish out the week!

As the introductory pricing period for the 2014 Civil Rights Act Silver Dollars draws to a close, Mint News Blog takes look a the current low sales figures and the obverse design that could have been.

CoinWorld has an in depth article on the 1974-D Aluminum Lincoln Cent, including legal opinions on private ownership, recollections of a die setter for the aluminum cents, and how the recently certified example resurfaced.

Numismatic News covers the recent sale of the Missouri Cabinet Collection of half cents.

A new video from the US Mint showcases the Code Talkers Congressional Gold Medals and the process involved in creating the 25 medals.

Brief histories of the four presidents who will appear on the 2014 Presidential Dollars.

A post on the Heritage Blog discusses the beauty of what might have been, referring to U.S. pattern coins.

Coin Collectors Blog shares his thoughts on what e-publishing means for the hobby.

Take a look at some of the nominees for the International Bank Note Society (IBNS) Banknote of 2013.

Here is a report from the launch ceremony for the latest Irish collector coin featuring John Count McCormack. The article includes numerous photographs from the event.

And now for some notable auctions. First, here is the 2000 “Cheerios” Sacagawea Dollar and Lincoln Cent still affixed to the original card. This is one of the 5,500 Golden Dollars distributed within boxes of Cheerios. It was later discovered that some of these coins featured a prototype reverse design, which differed from the final design.

Next, the 1964 Accented Hair Kennedy Half Dollar graded PCGS PR68. An estimated 1% to 3% of the total mintage of proof half dollars for this year are the accented hair variety.