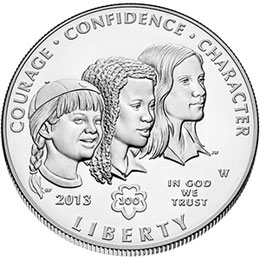 Additional details are available on the release of the 2014-dated American Silver Eagle bullion coins. The initial allocation available on January 13 will be approximately 3.5 million coins, which is less than the opening day sales for the prior year coins.

In other US Mint news, lesson plans for the 2014 America the Beautiful Quarters are now available and the application period for artists to design US Mint coins and medals ends this week.

Mint News Blog covers the recent sell out of some US Mint numismatic products and unfortunate development for the Girl Scouts of the USA commemorative coin program.

Coin Collectors Blog reflects on the failure of the Girl Scouts commemorative coin program and Steve Roach provides a lesson to be learned.

What will work for promoting new US Mint numismatic products?

Stack’s Bowers Galleries and Heritage Auctions have signed a four-year contract to be the official auctioneers of the World’s Fair of Money.

The Long Beach Expo is offering free admission coupons as they celebrate their 50th anniversary.

The UK’s Royal Mint has run out of 2014 Sovereign gold coins in the face of “exceptional demand.”

An introduction and overview of collecting Obsolete Bank Notes.

A site offering basic information on early US dimes.

And now for today’s notable auction. Here is the 2006-W Reverse Proof Gold Eagle graded PCGS PR70 First Strike. The coin was issued in the 20th Anniversary Gold Eagle Set and remains the only reverse proof Gold Eagle issued by the US Mint.