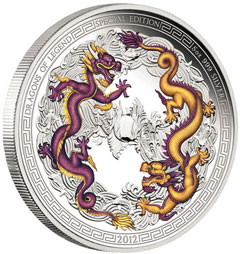 The Perth Mint has released a number of new products including a special edition 5 ounce Dragons of Legend coin, the 2012 High Relief Australian Kangaroo Silver Proof Coin, and the latest releases for several coin series.

The pace of sales for the US Mint’s 2012 San Francisco Silver Eagle Set continues to accelerate. The latest daily sales number came in at 201,059.

Here are some impressions from Dave Harper, written before today’s sales jump above the 200,000 level.

Here is a local news article that also covers the sale.

Meanwhile, the first penny issued in Scotland sold at auction for £8,400, which was more than three times the estimate.

According to CoinWorld, the Sacagawea Dollar/State Quarter Mule Error that is included in the upcoming Stacks Bowers Rarities Night auction is not within the census of 11 examples previously reported.

The Canadian Loonie recently celebrated its 25th anniversary. Interestingly, the Canadian $1 coin was not originally intended to carry the loonie design.

The ANA and ANS have joined together to present an exhibit of the US Mint’s first issues at the World’s Fair of Money held August 7-11.

On an overall basis, sales of gold bullion coins fell during the second quarter. American Gold Eagle sales had their worst three months since the second quarter of 2008. Canadian Gold Maple Leaf sales were the bright spot, actually rising compared to the prior quarter, as the coins took market share from other world mints.

CoinWeek has part one of a series on African-Americans on US Coins, covering the Booker T. Washington and Washington-Carver commemorative half dollars.

A Greek-Australian archaeologist believes he could have found Australia’s first currency exchange system.

A post from Coin Collectors Blog which explores areas of numismatics other than legal tender coins.

One of the two commemorative coin programs for 2013 will honor the five United States Army Five-Star Generals. Here is a look at the design recommendations provided by the Commission of Fine Arts.

And now for some notable auctions. First, an auction for a full box of 50 Federal Reserve rolls of uncirculated 1961 Roosevelt Dimes.

Next, a lot of 18 of the US Mint’s America the Beautiful Five Ounce Silver Coins with various designs and including some numismatic versions.