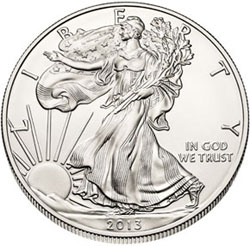 We’re back with another daily round up of coin collecting news and articles from around the internet!

Dave Harper provides some perspective on the Silver Eagle record with a comparison to silver dollar output in 1921 and 1922.

Coin Rarities & Related Topics provides the fifth article in a series on the Eric Newman Collection. This one is focused on the 1796 half dollars.

Here are NGC has announcements on the expansion of plus grading to modern coins and a 21st century submission special.

The USPS has reissued the classic Inverted Jerry stamp error on a new $2 stamp with a small number of sheets showing the plane right side up. Steve Roach says the US Mint should not follow the example of purposely making errors.

November 12th marked the anniversary of the day in 1984 when it was announced that the English £1 note would be phased out. Here are 10 facts about the pound sterling.

And now for today’s notable auction. A lot of commemorative proof silver dollars which includes a total of 38 pieces. Some better issues are included such as the Atlanta Olympic Set and the Buffalo Silver Dollar.

That’s it for today’s update. See you next time!