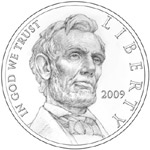 Each day we bring you a round up of the most interesting or important coin collecting stories from around the web! First, a new concept for buying and selling gold and a source of low premium silver. Also, 2009 Lincoln Commemorative designs are released, the 10th Anniversary Platinum Eagle Set returns, PCGS Genuine service, Australian Animal $1 Coins, holiday gift ideas, and notable auctions. On to the links…

An ex-Apprentice contestant starts a peer-to-peer network for buying and selling gold and silver. I haven’t tried this service and probably won’t but it’s a very interesting concept.

Are you tired of paying huge premiums for physical silver? Here’s one way to find low premium silver.

The designs for the upcoming 2009 Lincoln Commemorative Silver Dollars are released. The reverse features the final words of the Gettysburg Address.

In other US Mint related news, the 10th Anniversary Platinum Eagle Set has gone back on sale at a lower price. Many who purchased the set at higher prices, would have preferred that the Mint did not bring this one back.

PCGS recently revised their Genuine Service. Now many coins that would have been returned in “body bags” will be slabbed as “Genuine.” Susan Headley has a post on what might be the reason behind the abrupt policy change.

Here is a story and video of the US Mint’s “Real Change” Truck that dispenses Presidential Dollars. A spokeswoman for the US Mint states that dollar coins would save taxpayers billions. (I think she meant millions, which is the usual quote.)

From Numismaster, 10 Great Holiday Gift Ideas. All, of course, are coin related!

And now for some notable auctions. First, nice round lots of 100- 2008 Silver Canadian Maple Leaf coins.

A key date 1885 Liberty Nickel in the fabled grade of PCGS PO01! Some collectors seek out these types of coins for low ball sets.  From what I have seen, getting a PCGS PO1 is more difficult than you would think.

And last, a nice example of a double denomination coin error with this Lincoln Cent struck on a Dime. Dates for both denominations are actually visible.

Have a great evening!