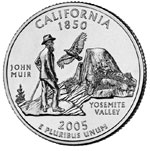 We’re back for another round up of coin collecting news from around the web! Gold and platinum fall again as Paul Volcker reappears. Also, one option for 2008-W Platinum Eagles sells out, coin dealer reader reviews, coin identification, State Quarter Program perspectives, Paypal micropayments, and notable auctions. On to the links…

Precious metals continue their recent decent. Gold falls to a one year low. Platinum falls to a three year low.

Does the re-appearance of Paul Volcker spell trouble for gold?

Less than a week after the 2008-W Platinum Eagles went back on sale at the US Mint, the 1/10 ounce coins have sold out. Many are anticipating (or hoping for) quick sell outs for the remaining options.

About.com:Coins rolls out an interesting new feature. Readers will now be able to offer their own reviews of coin dealers that Susan Headley has reviewed.

Separately, another new feature is about to debut. Tom Michael will start a new category on his blog called What is it? that will allow readers to send images of coins that they have been unable to identify.

With the 50 State Quarters Program coming to an end, there have been a lot of recent perspective pieces on collecting the series for ten years. Here are two recent articles.

Paypal very quietly launches a separate micropayments service. If you routinely sell items for less than $10, the micropayments pricing structure will likely save you some money. Here’s a link to the secret Paypal micropayment site.

For some reason, hollow spy coins have been making the rounds in the blogosphere. Here are some nice photos on Gizmodo.

And now for some notable auctions. First a near gem key date coin. The 1932-D Washington Quarter in NGC MS 64. The coin is housed in an older style holder.

Next a nice example of a 1795 Flowing Hair Dollar graded VF30 by PCGS.

Last, a gigantic lot of 50 Washington Presidential Dollars all with the missing edge lettering error.

See you all tomorrow!