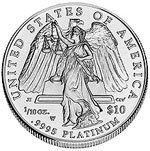 We’re back with another round up of coin collecting news from around the internet! First,  stories on gold, silver, and platinum. A unique opinion on Presidential Dollars, 2008 American Legacy Collection, ancient Roman coins, eBay rumor, and notable auctions. On to the links…

The decline in gold has brought some naysayers back to the table. Here’s a recent commentary published on Bloomberg that makes some pretty sweeping statements. And here’s a reaction to the article that takes apart many of those statements.

The interesting endeavor of trying to purchase silver near its market price. As the author states: “On paper, it’s cheap. But in the real, physical market, silver is getting very precious indeed.”

Platinum is almost the same price as gold. The chart paints a pretty dramatic picture.

The 2008 American Legacy Collection is scheduled to go on sale at the US Mint. It’s a nicely packaged set, but the individual components can already be purchased for about $29 less.

Ancient Roman coins, remarkably “fresh as the day they were minted,” will be available in the Heritage NYINC auction.

I haven’t heard this rumor before: Is eBay ditching collectibles? While they do seem to be positioning towards fixed priced “new” items, I doubt they would eliminate the category completely.

And now for some notable auctions. First, a no reserve, near gem, key date Peace Dollar. It’s the 1928 Peace Dollar NGC MS 64.

Next, a neat looking 2005 Minnesota State Quarter Error Coin. It is off center with a straight clip, graded PCGS MS65.

And this last auction you can take with a grain of salt. It’s for a “not fake” 1943 Copper Cent. Included is a grading report which lists a different coin identified as a man made mutilated coin, but I’m sure the 1943 copper cent is genuine, right?

See everyone on Friday!