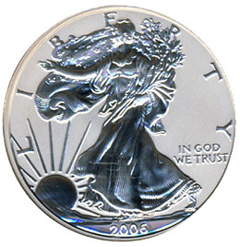 We’re back with another round up of coin collecting news and articles from around the internet! The United States Mint’s 25th Anniversary Silver Eagle Sets achieved a rapid sell out with ordering difficulties reported by many collectors. Also, designs for the 2012 Infantry Solider Silver Dollar, coin legislation moves forward, making the Perth Mint’s 1 tonne gold coin, Fort Knox, ancient coins, Viking silver hoard, coins as an inflation hedge, and notable auctions. On to the links…

The US Mint’s 25th Anniversary Silver Eagle managed to sell out in 4.5 hours yesterday. Mint News Blog was buzzing with activity during the past two days. Here is a post with more than five hundred comments posted on the day of the sale, and a separate post following the official sell out.

Additional reactions and coverage of the sell out can be found on Coin Update News, About.com:Coins, CoinWeek, and Doomberg.

Final designs for the 2012 Infantry Solider Silver Dollar have been announced. The obverse and reverse designs match the recommendations of the Commission of Fine Arts.

Here is a video and images of the design announcement, which includes a look at a prototype example of the coins.

The House of Representatives voted 416-3 to pass a bill calling for Baseball Hall of Fame commemorative coins. The specifics of the legislation recommend a concave obverse and convex reverse for the gold coin and silver dollar.

This article from The Atlantic notes the three Congressman who voted against the bill. One of them was presidential candidate Ron Paul.

Paul M. Green wrote this article in early 2006 about Congress and coin legislation. Quote from the article: “The fact is there is a good deal of history to suggest that the Congress rarely understands what it is doing when it approves new coins.” Interesting predictions are made for the Gold Buffalo bullion coins, Presidential Dollars, First Spouse Gold Coins, and 2009 Lincoln Cents.

Some impressive pictures of the 1,000 kilogram gold coin created by the Perth Mint. Also, here is a YouTube video about the making of the coin, which includes an explanation of why it was made.

Some fun facts about the Fort Knox Gold Bullion Depository, including its construction, contents, and some other valuable items that have been stored there.

The world’s leading art collector has been purchasing ancient coins. At a recent auction, he purchased a stater from Thurion estimated at 6,000-8,000 pounds sterling for 85,000 pounds.

A metal detector enthusiast has discovered a Viking hoard of more than 200 silver pieces that were contained in a lead pot.

An interesting look at prices for mint state 65 type coins during the past three decades. The author suggests rare coins as an inflation hedge.

And now for some notable auctions. First, here is an auction for the five 2010-P America the Beautiful Five Ounce Silver Uncirculated Coins, which seem to have moved off the radar with the release of the anniversary sets.

That’s it for another update. Have a great weekend!